The great colorist, Cory Adams passed away on Tuesday, November 15th, 2016.
She painted incredible pages on the Muhammed Ali and Superman book. She was the ex-wife of Neal Adams. She started with traditional color art on comics, then blue line work, and later with photoshop. Her work was often seen in products from Continuity Studios.
Posted by CortoBD at 10:34 PM No comments:

Jerusalem: A complex and compelling new novel by Alan Moore! 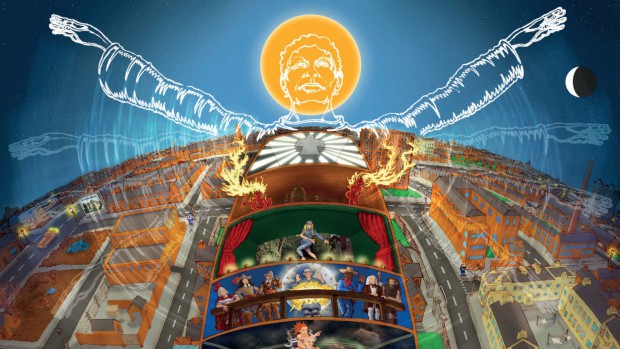 The new Alan Moore novel will be published within a week. I recommend his work to those unfamiliar with his work as he has much to offer. He has often delved into historical, spiritual, mystical, and political themes. He has worked on this novel for many years and it is finally here. Like the Voice from the Fire much of the piece revolves around Northampton, his birthplace, and its linkage to past, present, and future experiences.

Here is an excerpt from Jerusalem, the scene taking place as an artist is starting restoration of a fresco:

"...  With a bleak, numb horror moving up his spine Ern realised that without its modelling disturbing the almost-flat plane on which it was described or breaking from the confines of its two-dimensional domain, the angel’s massive face was turning slowly, still within the surface of the fresco, to regard him with a gaze that was head-on."


"Every note of it seemed to be spiralling away in countless fainter and more distant repetitions, the same tones at an increasingly diminished scale until these split into a myriad still smaller echoes, eddying minuscule whirlwinds made of sound that spun off into the persistent background thunderclaps and disappeared."
Alan has always managed to explore, time, space, and the glue that binds them, showing the magic behind our "reality."
"...In the few moments that had actually elapsed since the commencement of the episode Ernest had clutched at and as soon discarded several desperate rationalizations of his situation. It was all a dream, he thought, but then knew instantly that it was not, that he was wide awake, that those teeth on the left side of his mouth still ached, with those upon the right retaining fragments of fried bread from breakfast. He decided that it was a prank, perhaps accomplished with a Magic Lantern, but was instantly reminded that the pictures cast by such devices do not move."
Moore is also effective at breaking up and holding moments in time, with all of their psychological underpinnings.
Moore's favorite chapter is on Lucia Joyce, where he uses a complex invented language throughout, reminding me of his first chapter of the Voice of the Fire.
Excerpted from Jerusalem by Alan Moore. Copyright © 2016 by Alan Moore. Published by Norton's Liveright Publishing Corporation in the US, and Knockabout in the UK. All rights reserved.
Jerusalem will be available as a three volume edition as well. 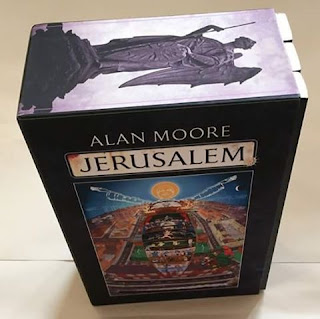 The cover image is by Alan Moore, who is also an artist. He started out his career drawing and writing, including bouts of Maxell the Cat, a Godzilla illustration, and much more. Check out his other projects including Electricomics.
Posted by CortoBD at 9:36 PM 1 comment:

Sergio Aragones is at Stockton COn today and tomorrow.

Sergio is located in the artist alley. He mentioned the awesome news that he is writing a Tarzan story, drawn with Thomas Yeates (of Prince Valiant fame), along with Mark Evanier. Aragones won the Iconic Icon award at San Diego Comic Con SDCC less than a month ago.

In other news, there will be a book on all of his work originally published in Mexico. This book is still in press.

Aragones also attended the Simpson's panel, along with Phil Ortiz, and Tone Rodriquez. Phil mentioned and recounted how he first visualized Apu. Aragones mentioned his huge collection of Simpson collectibles. His favorite Simpson character is Maggie, Phil's is Sideshow Bob, and Tone likes Radioactive Man. All of the artists spent time drawing for the ELMO screen.

Ron Lim was also present at the convention.

Sergio also has a new Groo series: Fray of the Gods. Looks to be one of the Best Groo story lines.

Tom Yeates created an image that was later turned into a mosaic.
Posted by CortoBD at 8:27 PM No comments:

The great lettering artist Gaspar Saladino has passed this last Thursday, thought to have been between the ages of 88-90 at the time. He was famous for lettering and logo design, his work was excellent, such that many professionals and fans recognized his work instantly. His most famous work was created between the mid 60s to mid 70s, including designing the Swamp Thing logo.

He is respected by many great artists, including Kevin Nowlan and Todd Klein.

Posted by CortoBD at 3:52 AM No comments:

Sergio Aragones is scheduled to attend Stockton Con. A few years back he attended a Sac Con, and many years ago he visited UCDavis. He recently won the SDCC Icon award--well deserved. The Icon award has been given out for 10 years, to comic artists.

The Stockton Con is set for late August.

There is a new Groo storyline from Dark Horse comics.
Posted by CortoBD at 7:30 PM No comments:

David Lloyd was once again present and he had a good location in the hall. A respected comic creator and the artist for the famous V mask---now known worldwide. He also mentioned his appreciation of Mr. Robot.

Kareem Abdul-Jabbar
was a hit at SDCC and he has a new comic book, Mycroft Holmes. Kareem is very intelligent and he has a degree in English. The questions from the audience were great.

The Conan tv show gave away special figure with Conan as Superman, Star Wars character, and so forth.

The great Sergio Aragones was present, as well as Mark Evanier. Sergio also won the and coveted Icon award---yea.

Stan Sakai had his artist edition book-- a nice oversized book of his Yojimbo book.

Geof Darrow has a new sketchbook, and same for Art Adams.

Gal Godot was present as Wonder Woman---looks to be good.

Sanrio, Hello Kitty, Marvel, The Walking Dead (Kirkman), and many others were also present, including Mignola of Hellboy fame.

Emilio Soltero, Ph.D. (Draw the Line, Figure It Out, John Buscema: A Life in Sketches) presents a primer on drawing the figure for popular media, including drawing for comics and character design. The focus will be on anatomy and figure drawing. Come ready to take notes and to draw. Cosplayers are welcome to join and artists of all levels are encouraged to attend. Bring your own materials. Some guest artists and cosplayers. Kat Bell in Batman costume. 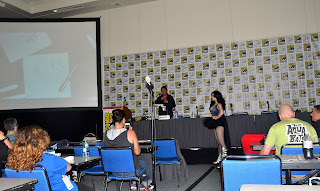 Lynda Carter has confirmed her role as the president for the upcoming Supergirl season. Lynda was the first actress to bring critical attention to a super heroine-- Wonder Woman.

She is also a great singer.

The Late Tony Dezuniga, DC artist, recalled when she came to the DC offices in New York, in the late 70s, everyone at DC was excited.
Posted by CortoBD at 11:37 PM No comments:

There will be some extra artists joining the presentation. The event will be Fri. evening with specific details coming soon. Artists bring your drawing materials.  This has been a popular panel for drawing levels, including professionals.

David LLoyd runs an awesome website with stories from many awesome writers and artists, featuring Herb Trimpe, James Hudnall, Steve Bissette, and many others.

You can even get free samples, showing you the quality of the work." I spoke with Mr. David Lloyd about it at last year's SDCC," Soltero said.

Check them out, really, at
www.acesweekly.co.uk
On a related, collaborative, note Alan Moore's Jerusalem is ready for orders at Amazon.
Posted by CortoBD at 12:35 PM No comments:

The great comic book artist and writer has died at the age of 53. He worked on animation and comic book projects. I believe he was scheduled to attend the upcoming San Diego Comic Con International. He died from cancer and he will be missed by his fans and family.

"I met him once or twice and he was very cordial," Soltero.

His most famous work is New Frontiers from DC.
He had a unique style, a retro look but one that never existed. He had a way with two tones, and flat colors, with an expressionistic application.

Another great project that he worked on was the Parker series of graphic novels.

Darwyn also had an awesome team-up with Gilbert Hernandez on the Twilight Children from Vertigo.
Posted by CortoBD at 8:35 PM No comments:

Soltero had a great time at Sac Con, meeting Steve Englehart (creator of Starlord from the Guardians of the Galaxy fame) and meeting up with Tom Yeates (the artist on Prince Valiant). He sat next to Bernie Wrightson. 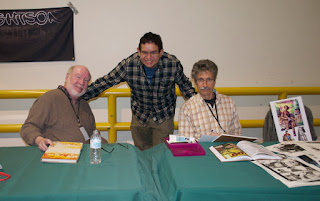 Due to personal/family issues Soltero will not be able to present this year at the Silicon Comic con this year.

Posted by CortoBD at 9:02 PM No comments:

A cool Corto Maltese cover on one the Overstreet bks.

Supergirl to broadcast an episode based on an Alan Moore Superman story.

Berni Wrightson to attend a nor-cal convention in March, 2016.

Wondercon in LA for the first time.
Posted by CortoBD at 11:54 AM No comments: